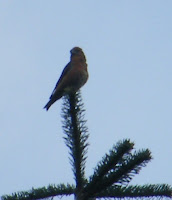 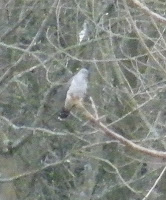 The first day of this spring that my Cousin, Dad and I went bird watching in Norfolk. I have already got 130 species of birds this year, and we're not even halfway through April. We first headed to Santon Downham in the Thetford area, looking for the elusive Lesser-spotted Woodpecker, where we parked by the side of a small track for a while. Unfortunately, it didn't show for us, but we did see Nuthatch and Coal Tits in this area. We then moved on to park at St Helen's picnic area further down the track. We walked around the church looking for Firecrest that we were told were more reliably seen here, but not today. My first Willow Warbler of the year was singing in a dense Hawthorn, and shew well on the top of it. The soft churring with a trill was being produced at the top of some bare trees, where Brambling's were feeding in small double figures (10-15).  We walked through the wood through to the river and alongside the trees. A nasally whistle of a pair of Mandarin Ducks flew over our heads and into the trees, lost from our view. As much as we used the 10 minutes to search for the pair of ducks, just a distant call indicated their disappearance. After hearing a drumming noise from the wood, we drove down the road in luck for the Lesser-spotted Woodpecker. we didn't see that, but I then spotted a very early male Cuckoo, hopping from tree to tree, superb. We then drove to Lynford Arboreretum, still within the Thetford area. On arrival we walked around the accessible path around the Paddocks to the bridge. Many small flocks of Crossbill were flying over our heads, but sadly not showing perched. We then tweaked on to a pair of Lesser Redpoll over the bridge at a medium level, but soon disappeared. We then got told by a man that by the Folley area we may be lucky to view Hawfinch feeding on the ground bellow the feeder. He also shew us a picture that he took about 5 minutes ago from that point, so we headed straight there. Within reaching their, a flock of about 10 Crossbill were in the tops of trees, a majority of them were males. After taking a few looks and pictures, we moved on to the Hawfinch, where I first found a female in a short ivy-covered tree. We were then fortunate enough to see 2 females feeding where we were told. Brilliant. A fantastic day.

My cousins link is www.jimsbirdingblog.blogspot.com