We all went to Lakenheath Fen today, and it was pretty obvious on what we were targeting, the Golden Oriole. We didn't hang around the house too long this morning, so we aimed to get there about 9am. After meeting up with a guided walk that were looking for the Goldies, so we hanged around behind them.

We reached the first viewpoint, and we were treated to a blue flash of a Kingfisher, zitting across the reeds. But oh no, people weren't looking at that, they were looking at 3 territorial Bitterns. This was very odd however, as they were flying high above the reeds in circles together!

After they reached touchdown, and out of sight, we realized that a group of people were looking up into the poplars. I asked the man "were they looking at a Oriole?," but the man said that they heard one about 5 minutes ago, so they were looking for the same bird again. Like we stood on a certain good luck rock, the Oriole sprung into life, bursting full of song, but do you think we could see it? No. While the drama was going on, the Reedbed Warbler species were enjoying themselves singing, away, it seemed that only Grasshopper Warbler were absent, not surprisingly.

We then moved on to another group of people, looking more promising into the Poplars. Reaching there, they said "the Oriole just sat there about 30-50 yards away," and we missed it. It was still singing, (see video), but was very, very difficult to see, with all the green leaves formed. With a couple of brief sightings from other people in the same area, I, personally, couldn't believe my eyes. Bearing in mind that there were about 40 people at this very space, I shouted out "I got it!." Everyone was crowding around as I tried to explain where it was, but frustratingly, they couldn't see it anywhere, but I could? I thought and said, "may I borrow someones scope to show it to all of you. This man let me, and believe it or not, I found it in the scope. It was indeed a male Golden Oriole, sitting motionless in the tree. Incredibly, everyone out of the 40 people saw it, and I was knighted. Such a fantastic lifetime moment for me, and I'm only 12!


When watching this video, turn up the volume to hear the Oriole singing at the start, either on your volume settings, or a remote control.

Other species of birds that were active around the reserve were the Crane family were feeding in the reeds, Reed Buntings, a pair of Garganey, and a brief Grasshopper Warbler flew into the short grass, but remained silent. The only thing we didn't see were Stone-Curlew, which we were hoping to catch at Lakenheath Warren, but anyway, another great day!

First day at the Patch this Year!

It was my first day at Bosmere this year, and the Great-crested Grebe pair have had 4 chicks this year. They have all fledged and are feeding on the lake alone with their Mum and Dad. A shock when I got there though was when a Blackcap was mimicking Nightingale. I thought that this was a actual bird singing, but no. Reed Warblers were back again this year, with a male singing. Lots of Mistle Thrushes have congregated on the patches farm this year, so obvious breeders.

A extremely early start, and getting up at 2:30am and leaving at 2:50am was a bit of a struggle, but on the way, 2 Hedgehog were awake, and so was a ghostly Tawny Owl, my first of the year. We got to Minsmere, and we split up into 2 groups. We headed out at 4:00am, and we were treated to a beautiful Nightingale, also my first for the year, singing it's heart in the lowlights. We headed round the woodland trial, and in the distance the first hearings of Bittern booming, Cuckoo, and Water Rail. We focused mainly on the commoner species such as  Chaffinch, Goldcrest, Treecreeper, Robin and Great Tit. After a great Part 1, we headed to the Island Mere Hide, where Bittern, Bearded Tit, Reed Warbler, Water Rail and Reed Bunting were singing in the reeds.

We completed our guided walk, and headed in for our well earned Breakfast. As light approached us, we headed out to the the other hides we missed out on. We headed to the East Hide, where there were Common Sandpiper, Common Tern, Sandwich Tern, and more exciting, a Roseate Tern. It was huddled up against a Black-headed Gull. I had to ask for some help when I spotted this Tern, as I wasn't sure what it was. After getting confirmation of this Specie by 2 very helpful birders, my Camera didn't fall for me today.

We headed on to the Sluice, where the Little Stint had been seen. Typically, it had gone back out to sea, but it had been replaced by a summer plumaged Knot. OK, it isn't as exciting, but it will do for the time. A pair of Common Gull were hanging out by a Little Gull on one of the mudflats. 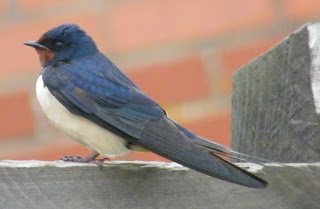 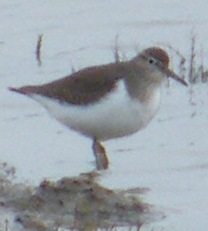 Another day at Minsmere, and another fantastic one. We knew what to expect there today, but we weren't sure if they were still about. I got a phone call from my cousin saying that there were 2 Black-winged Stilts behind the Sluice bushes, in the flooded meadow. Before we went there, we went to see the weeks staying Wryneck near the Visitor Center, pictured top. This stayed in the same position for a while, so we moved on.

Moving through the North Bushes, and a pair of Garden Warblers were singing in the gorse. 2 Ringed Plover, a Sanderling and a Dunlin were all present along the mud flats. But then, a migrant Common Sandpiper moved into view, and brought some Tern species with it. This included Sandwich, Common, Arctic and Little. We then moved on to the Stilts, but they were extremely distant, you couldn't pick them out with binoculars. The commoner summer migrants were all about, with both Whitethroat species, plus Blackcap, Chiffchaff, Reed and Sedge Warblers.

We were then rewarded with an absolute treat. We took a stroll to the Island Mere Hide, where a Bittern was taking fantastic views in front of the hide, pictured middle. Another treat was a brief Otter, which swam across the river, into the reeds. I couldn't believe the number of Hirundines, especially the Swifts! But they weren't the only Hirundine shaped-bird in the flock. Several Hobby's were catching insects as well. Another great day, but not quite finished, as a last stop in Westleton produced a Ring Ouzel, pictured bottom. Fantastic. 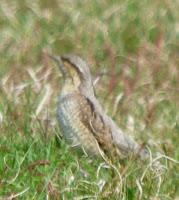 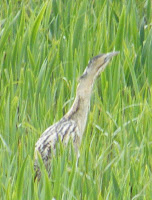 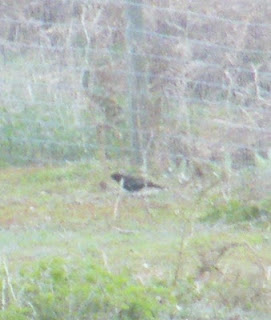 Another wet week, but with Swallows now starting to spread around the UK, it is time for another Hirundine to turn up, the Swift. But no, this didn't just turn up in a suspected place, like a Reserve, it turned up in our back garden! It didn't stay for long, as a magpie shooed it off.

Golf Lesson today, and the local Common Buzzard pair were soaring above the driving range, accompanied by a Skylark, and a Kestrel. My Golf teacher mentioned that there was the pair of Barn Owls that bred last year was sighted for the first time this year last night at 8:30pm.

Nothing great was seen at school this year, but a Jay, Swallows and a Chiffchaff were all singing, so a bit of spark. my Dad and I are hoping to go birdwatching on Monday, so hopefully good birds, and I will tell you about that soon.

What a horrible night. I was up at midnight because of the rumbling of the Thunder, and I must admit, I was a bit scared.

Getting the snorkel and Masks out of the cupboard to avoid the big puddles on the way to my Bus Stop this morning, a resident pair of Linnets have been enjoying the small, over grown field we have opposite the bus shelter.

Moving towards school on the coach, a Grey Wagtail flew up from an over-flowed stream, and on to a roof top. A few  Swallows are still showing, but I'm sure the numbers will increase.

For you "Twitchers" out there, on the 2nd of May, you may have noticed that a Male Pied Flycatcher was close to the reserve center, along with the commoner birds.

An update from Blue Tit Cam back at home, and we now have a big total of 10 eggs in our box, and "Mamma" Blue Tit is spending most of the time incubating. Hope the weather improves and speak to you soon.