Our 3rd consecutive year on this wildlife spectacled, Isle of Mull. This place is literally a dream come true, especially in the south of the Island. Based on the Western Isles of Scotland, it gets its rarities, as well as its beautiful scenery, incredible. You don't need to be a bird or nature lover to come here, its just incredible! Anyway, enough of the persuading, lets got on with the actual holiday.

First trip on the first day was down to Grasspoint, and it was a great couple of hours to spend the day after getting off form the ferry crossing. Plenty of Auks were visible from the ferry, all that was missing was a Puffin. Guilemot, Black Guilemot, Razorbill and Rock Dove were all visible. Grasspoint is a bit isolated on the island in the south-east corner, so its a bit of a drive. on the way through Glen More mountain range, a pair of Golden Eagle were on the lookout. A Wheatear in Pennyghael was an intriguing site, but they definitely breed here. Also on the list were plenty of Hooded Crows (Hoodys), a brief Redstart, Stonechat, Willow Warbler in good numbers, Lesser Redpoll and Common Sandpiper. A great number of Short-tailed Voles bring back breeding Hen Harriers, and Short-eared Owls. Only Hen Harrier were seen today, but Shorties were seen most other days. Another nice sighting was a male Whinchat, which are also breeding here in good numbers. Back in Pennyghael, a male Cuckoo was singing from a fence post, and remained settled for a while, and allowed photographs to be taken. All three resident Pipits here were present at Grasspoint, and not surprisingly, Water Pipit is not seen here. 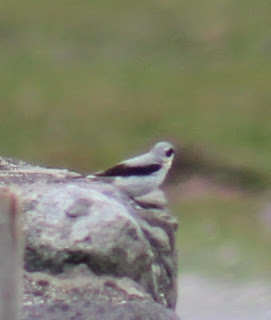 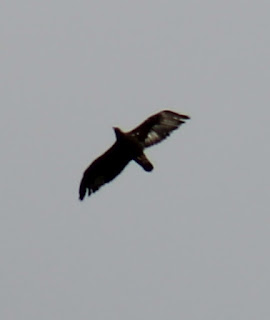