Dad and I visited RSPB Snettisham for the first time on Monday, looking for the adult White-rumped Sandpiper. As the title says, it had moved on from the reserve, so I was a bit annoyed, and then it was located at Cley the following day! Another scarce wader miss!

It was a long walk from the car park to get to the Rotary Hide, or The Wash itself. Along on the pits held plenty of Greylag Geese, and Black-headed Gulls. A lovely sight though was about 30 Golden Plovers flying over our heads, and we then located them on the mudflats on The Wash..... 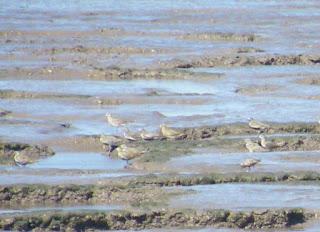 Some more waders on the list included about 50 Sanderling, 80 Dunlin, and in the distance, the swirling flocks of about 400 Knot was a nice sight. Some careful searching amongst the Dunlin included a Curlew Sandpiper, the second bird in about a week! Plenty of Terns were about too, with Common, Arctic, Little and Sandwich all present.

We then took a detour to Titchwell Marsh, hearing that a Little Stint was on the Freshmarsh. Parking in the Car Park and, walking up to the visitor center, we noticed that the Little Stint was still about, so we headed straight out. Getting past the first bed of reeds was a great tactic, as a Bittern was flying straight towards us, then landed in the reeds. If I could have had my camera ready, I would have made the photography world headlines! Other interesting birds of note included Little Egret, Dunlin, Ruff, Avocet and Curlews. He are some videos......

We got to the Island Hide, and plenty of the normal stuff were about on the Freshmarsh, including the Little Stint, which was incredibly distant, even in the scope it was just a dot moving about on the stones. To far away to get a pic, but the Black-tailed Godwits got a good view, with the Stint hopping around them. The Egyptian Geese were having good times, swimming around the Freshmarsh, accompanied by the Common Tern. 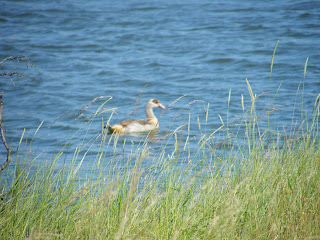